What is Hydrostatic test?

A hydrostatic test is a way in which pressure vessels such as pipelines, plumbing, gas cylinders, boilers and fuel tanks can be tested for strength and leaks. The test involves filling the vessel or pipe system with a liquid, usually water, which may be dyed to aid in visual leak detection, and pressurization of the vessel to the specified test pressure. Pressure tightness can be tested by shutting off the supply valve and observing whether there is a pressure loss. The location of a leak can be visually identified more easily if the water contains a colorant. Strength is usually tested by measuring permanent deformation of the container. Hydrostatic testing is the most common method employed for testing pipes and pressure vessels. Using this test helps maintain safety standards and durability of a vessel over time. Newly manufactured pieces are initially qualified using the hydrostatic test. They are then re-qualified at regular intervals using the proof pressure test which is also called the modified hydrostatic test.[citation needed][clarification needed] Testing of pressure vessels for transport and storage of gases is very important because such containers can explode if they fail under pressure.

Hydrostatic tests are conducted under the constraints of either the industry's or the customer's specifications, or may be required by law. The vessel is filled with a nearly incompressible liquid - usually water or oil - pressurised to test pressure, and examined for leaks or permanent changes in shape. Red or fluorescent dyes may be added to the water to make leaks easier to see. The test pressure is always considerably higher than the operating pressure to give a factor of safety. This factor of safety is typically 166.66%, 143% or 150% of the designed working pressure, depending on the regulations that apply. For example, if a cylinder was rated to DOT-2015 PSI (approximately 139 bar), it would be tested at around 3360 PSI (approximately 232 bar). Water is commonly used because it is cheap and easily available, and is usually harmless to the system to be tested. Hydraulic fluids and oils may be specified where contamination with water could cause problems. These fluids are nearly incompressible, therefore requiring relatively little work to develop a high pressure, and is therefore also only able to release a small amount of energy in case of a failure - only a small volume will escape under high pressure if the container fails. If high pressure gas were used, then the gas would expand to V=(nRT)/p with its compressed volume resulting in an explosion, with the attendant risk of damage or injury. This is the risk which the testing is intended to mitigate.[citation needed] 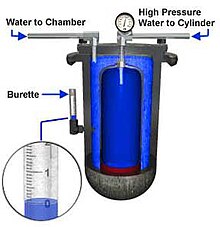 Small pressure vessels are normally tested using a water jacket test. The vessel is visually examined for defects and then placed in a container filled with water, and in which the change in volume of the vessel can be measured, usually by monitoring the water level in a calibrated tube. The vessel is then pressurised for a specified period, usually 30 or more seconds, and if specified, the expansion will be measured by reading off the amount of liquid that has been forced into the measuring tube by the volume increase of the pressurised vessel. The vessel is then depressurised, and the permanent volume increase due to plastic deformation while under pressure is measured by comparing the final volume in the measuring tube with the volume before pressurisation. A leak will give a similar result to permanent set, but will be detectable by holding the volume in the pressurised vessel by closing the inlet valve for a period before depressurising, as the pressure will drop steadily during this period if there is a leak. In most cases a permanent set that exceeds the specified maximum will indicate failure. A leak may also be a failure criterion, but it may be that the leak is due to poor sealing of the test equipment. If the vessel fails, it will normally go through a condemning process marking the cylinder as unsafe.[citation needed]

The information needed to specify the test is stamped onto the cylinder. This includes the design standard, serial number, manufacturer, and manufacture date. After testing, the vessel or its nameplate will usually be stamp marked with the date of the successful test, and the test facility's identification mark.[citation needed]

A simpler test, that is also considered a hydrostatic test but can be performed by anyone who has a garden hose, is to pressurise the vessel by filling it with water and to physically examine the outside for leaks. This type of test is suitable for containers such as boat fuel tanks, which are not pressure vessels but must work under the hydrostatic pressure of the contents. A hydrostatic test head is usually specified as a height above the tank top. The tank is pressurised by filling water to the specified height through a temporary standpipe if necessary. It may be necessary to seal vents and other outlets during the test.

Hydrotesting of pipes, pipelines and vessels is performed to expose defective materials that have missed prior detection, ensure that any remaining defects are insignificant enough to allow operation at design pressures, expose possible leaks and serve as a final validation of the integrity of the constructed system. ASME B31.3 requires this testing to ensure tightness and strength.

Buried high pressure oil and gas pipelines are tested for strength by pressurising them to at least 125% of their maximum allowable working pressure (MAWP) at any point along their length. Since many long distance transmission pipelines are designed to have a steel hoop stress of 80% of specified minimum yield strength (SMYS) at Maximum allowable operating pressure MAOP, this means that the steel is stressed to SMYS and above during the testing, and test sections must be selected to ensure that excessive plastic deformation does not occur.[citation needed]

Other codes require a more onerous approach. BS PD 8010-2 requires testing to 150% of the design pressure - which should not be less than the MAOP plus surge and other incidental effects that will occur during normal operation.[citation needed]

In the aerospace industry, depending on the airline, company or customer, certain codes will need to be followed. For example, Bell Helicopter has a certain specification that will have to be followed for any parts that will be used in their helicopters.